If there is one thing that the Cambridge Analytica scandal taught us, it’s that politicians are mostly clueless about the political implications tech and social media bring about for society.

What went largely unreported is that they also don’t have much of an idea about the economic transformation behind Facebook’s success in establishing a business model with near-monopolistic market power in social media, at least for the time being.

It’s part of a shift to an emerging economic model where value creation is driven by intangible assets and investments with huge consequences for rent-seeking strategies and workers.

Given these dramatic changes, policymakers need to update their economic thinking of work in society and find policy solutions that better reflect the unfolding changes of big tech and innovation. That includes shifting the debate on digital from micro to macro and rethinking how the distribution of the economic benefits of digitalisation can be translated into an inclusive growth model.

To begin with, despite similar levels of automation anxiety to earlier major structural transitions, the main difference today is that we are seeing a systemic digital transformation across the economy and society.

In previous industrial shifts, incumbents were challenged by new, unexpected innovations. They came in as a bang and changed the way we produced goods and worked (e.g. steam engine, electricity or personal computer). Throughout this process innovating firms are rewarded with high rents. Protected through intellectual property rights, they mark up prices and cash in on their investments.

In today’s digital environment the added value of products and services increasingly comes from intangible components – things that you can’t drop on your foot, such as branding, software, training, databases and intellectual property rights. This development blurs our understanding of traditional manufacturing and service industries.

Take Rolls Royce as an example which no longer sells engines but “aviation hours” to its customers. Doing so the company not only offers a physical “traditional” good in form of an engine to customers but also maintenance services which require intangible investments. In some developed countries (the UK, US, Finland and Sweden) these investments in intangibles already exceed tangible investments and may become even more important.

In this “dematerialised economy” the gains from production can be vast. Firms can benefit from “winner-take-all” markets in some industries and regions (Amazon in the retail, Facebook in social media, Google in online advertising).

In this “dematerialised economy” the gains from production can be vast

This process of digitalisation is being magnified in two ways. First, as information, data and software become more widely available the costs of production of goods and services go down. Some even argue that these production costs are close to nil. Secondly and closely connected, the powerful, penetrating use and availability of data, information and software allows for huge scalability and further stimulates digital innovation.

An innovation economy is hungry for often risky public and private investments in R&D and education. Private investment in information and telecommunication technology in Europe has been lagging compared with the US and China, where a unique eco-system of different types of new venture capitalism is evolving. There, private investors are chasing unicorn investment opportunities, sometimes with dire consequences for workers.

This shift from labour to capital is taking place against the background of a stagnating labour income share in the UK (and internationally) and the ongoing scuffle to raise productivity and wages. The combination of a “winner-takes-all” investment mentality and a fall in living standards in an era of high debt and low growth poses the question of how to share the benefits in a digital economy more widely and build an economic model on inclusive growth.

How can we share the benefits in a digital economy more widely and build an economic model on inclusive growth?

A straightforward solution would be to simply readjust the tax burden between capital and wage income. As machines become better at substituting human labour, sustaining a high level of taxes on workers’ income may not be a good idea, potentially driving unemployment and inequality.

A straightforward solution would be to simply readjust the tax burden between capital and wage income...

Yet, higher taxes on capital and wealth (“robot tax” or “digital tax”) often require internationally coordinated policy solutions. They need to address existing legal loopholes and cross-border enforcement issues, for some of which the EU has most recently tabled proposals. Other countries, including the UK, are currently reviewing how tech companies are taxed which may prove crucial for creating a level playing field for off- and online businesses.

Another option would be to foster plural ownership models. These would include non-classical business forms, from worker cooperatives to mutual benefit societies or social enterprises. Cooperatives may have a huge potential for rendering the rising platform economy more equitable. Digital cooperatives are digital platforms that are collectively owned and democratically governed by workers – and sometimes by users as well – supporting guaranteed pay, representation and security. They flourish in the ride-hailing business in the US but remain limited in scope (see Juno). They also exist in the care or cleaning sectors (for example ‘Up and Go’) and show that gains in digital can coexist with decent work.

... another option would be to foster plural ownership models

This may sound like a centre-left utopia as the concept of cooperatives never really took off the ground in the UK where we only a few hundred of them exist (they are more popular down south in Italy or Spain).

Yet, advancing thinking on cooperative solutions may follow a trend in Britain where social enterprises are emerging as a genuine alternative to for- and not-for-profit firms. Employees in social enterprises have nearly doubled between 2014 and 2017 (up to an estimated 1.44 million).

Much of why cooperatives are not overly popular has to do with the bureaucracy of opening them, low returns on investments and internal time-intensive collective decision-making. Some of these issues might be resolved through innovative tech solutions, a research area that the Centre for Progressive Policy seeks to explore in more detail in future research.

Of course, this analysis of how to share the benefits in a dematerialised economy is far from exhaustive. There are other factors that need attention, including labour market disruption, artificial intelligence, gender equality and what it all means for skills and education. Yet, shifting the focus from micro to macro provides policymakers with a good starting point to steer the economy through the challenges of the fourth industrial revolution.

This article was first published by CapX. You can follow Florian Ranft @FloRanft 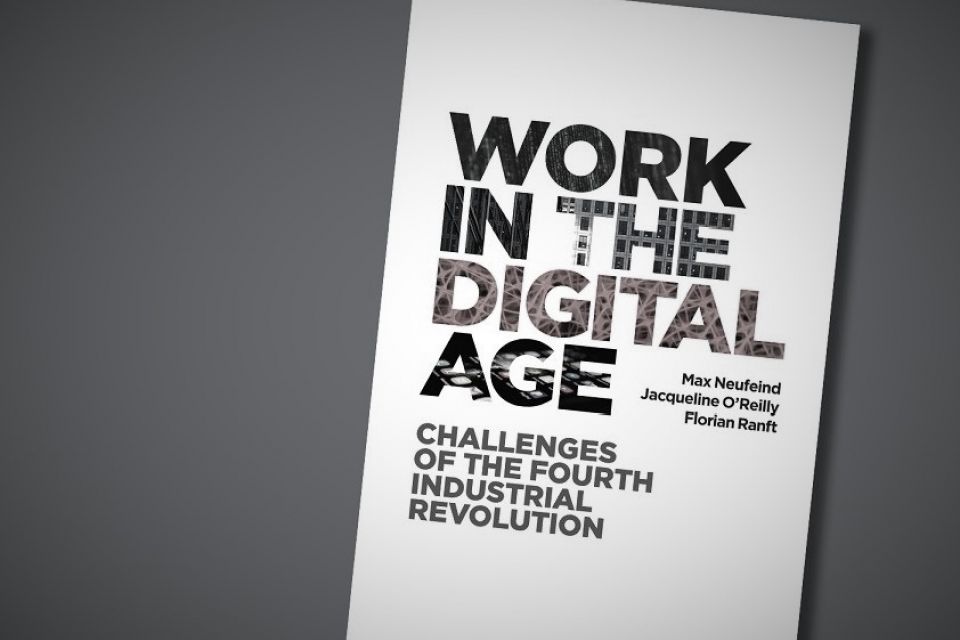 Work in the Digital Age - Challenges of the Fourth Industrial Revolution