Covid-19 has caused the worst economic crisis since the Great Depression requiring an unprecedented policy response to save businesses and jobs in the short term. But how the government handles the relationship with businesses now will set the tone for a post Covid-19 future. Whilst supporting businesses remains essential for economic growth, the government should ensure that any future grants, loans and bailouts are used to support an inclusive recovery.

Today the government announced they were extending the maximum loan size available to support large businesses from £50m to £200m. Equally important, they also announced that there would be constraints on this and other support for large businesses. Companies receiving support through the large business scheme - known as the CLBILS - will be asked not to pay out dividends on shares and to “exercise restraint on senior pay”. New research by CPP suggests that there is widespread public support for such measures, and that government should go further by stipulating that big businesses in receipt of government support should:

Read the full report below:

Public opinion research was carried out by Populus for the Centre for Progressive Policy. The four focus groups took place in London, Liverpool, Bury and Redcar between 16th and the 19th March 2020. As this research took place during the outbreak of COVID-19, the groups consisted of a mix of face-to-face and online focus groups. There was a good spread of ages, socio-economic background and genders amongst participants. Online polling took place between the 9th and 13th of April 2020. Results are drawn from a regionally and demographically representative sample of 2,174 UK adults. 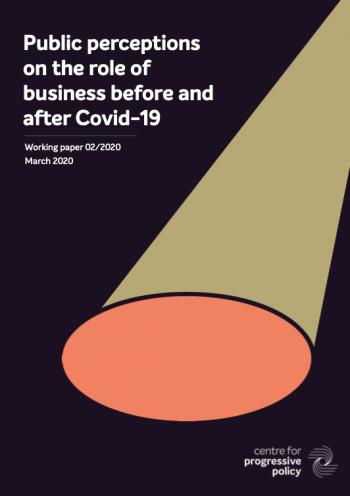 Weekly update on which local authorities face the greatest health risk from Covid-19.