Local authorities, mostly in the North and Midlands, are severely exposed to rising prices through a highly vulnerable population alongside a high share of local jobs in energy-intensive sectors

The cost of CPP's package to support people and places through this crisis, while laying the foundations for their recovery

This report explores the challenges facing different places during the cost-of-living crisis. It combines an updated version of our cost of living vulnerability index highlighting which places in England are most vulnerable to the impact of rising costs, with interviews with local authority officers revealing the experiences of those on the front line in local government dealing with the crisis. We offer policy recommendations to give areas the financial power and agency required to support residents and businesses, both in immediate response to the crisis, and to recover and rebuild in the long term.

Which places in England have become more vulnerable to the cost of living crisis?

The report updates CPP’s previous Cost of Living Vulnerability Index, to reveal the changing nature of places most susceptible to poverty and finds:

How are places responding to the cost of living crisis?

The report summarises interviews with 21 local government officers working on the frontline to explore the key challenges places are facing. Key findings:

The analysis and interviews underline a strong case for providing vulnerable places with greater financial assistance to deal with the crisis, allied with stable long-term funding to deliver sustainable inclusive growth. To meet these aims, this report makes several recommendations:

Our package would cost £11.8bn annually over the course of this crisis and is accompanied with a further £9.6bn of investment annually from 2024 until 2030. In the face of the immediate crisis, this ambitious new package would shift considerable power to places and transform the local government funding landscape, empowering places to better respond to the needs of their communities while laying the foundations for their recovery and decarbonisation. 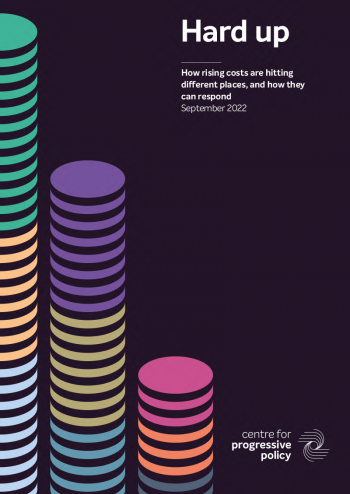