Decrease in household income among median income households due to housing costs.

Lowest income households have seen their housing costs rise at more than twice the rate compared to the top 20%.

The housing crisis, marked by an increase in housing prices and lack of affordable housing presents a barrier to inclusive growth. The latest Centre for Progressive Policy (CPP) analysis shows that house prices have increased in the last 20 years at a much faster rate than earnings, resulting in a decrease in disposable income across median households in the UK. Building on our previous analysis we call for a reform of the Land Compensation Act 1961, to increase investment in infrastructure.

Housing costs for both renters and owner occupiers have been the major driver in the cost of living over the last 20 years. An analysis of household incomes and housing costs between 1997-98 and 2016-17 indicates that:

Recognising the need to increase supply to tackle high housing costs, the government set the housebuilding target for England to 300,000 p.a. However, the gap between output today and this target remains significant. Centre for Progressive Policy analysis suggests that if the 300,000 target is met year on year then this would significantly help improve the living standards of the squeezed middle. Instead of the median quintile experiencing an 8% fall in household income, it would have experienced a 4% increase over the period 1997/98 to 2016/17. But such an increase in output in both social and private sector housing will not be achieved unless infrastructure investment is dramatically increased.

One policy recommendation that could facilitate a significant increase in investment would be to amend the Land Compensation Act 1961 thereby enabling development corporations to receive a greater share of the uplift in land values as recommended by the cross-party House of Commons Select Committee on Housing and Local Government.

Prior research by CPP estimates that such a policy shift could unlock over £200bn of potential investment in infrastructure and affordable housing over the next 20 years which would enable the government to meet its target of 300,000 for England. 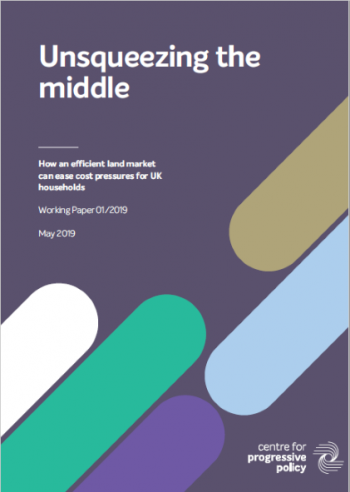